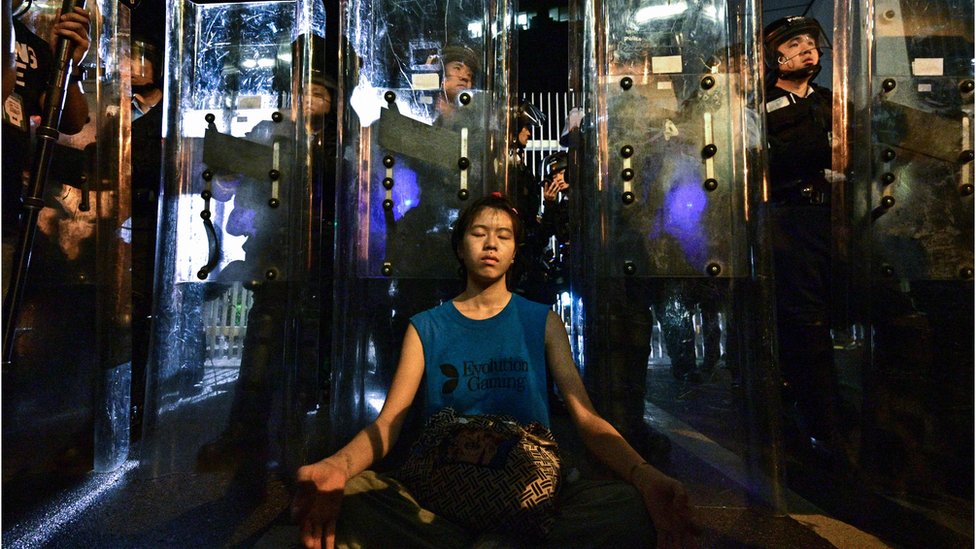 Mass protests are again set to hit Hong Kong with some businesses also on strike as anger grows over plans to allow extradition to mainland China.

The action comes as lawmakers are set to debate amendments to extradition laws on Wednesday.

The city saw huge protests against the bill on Sunday.

The government has said it will continue to push for extradition and is likely to get the bill passed in the pro-Beijing Legislative Council.

Critics of the bill have cited the alleged use of torture, arbitrary detentions and forced confessions in the Chinese judicial system.

The government has promised legally binding human rights safeguards and other measures it says should alleviate concerns.

The widespread opposition has led to the largest rallies the territory has seen since it was handed back to China by the British in 1997.

What action is planned for Wednesday?

An online petition called for 50,000 people to surround the Legislative Council (LegCo) building at 22:00 local time on Tuesday (14:00 GMT) and remain until Wednesday.

Several thousand people turned out despite heavy rain. There is a heavy police presence around the building, and young people have been stopped and searched.

The Civic Party, a pro-democracy group, posted on Facebook calling for closures across Hong Kong.

More than 100 businesses including a magazine have said they will shut to allow their staff to protest for freedom.

Nearly 4,000 teachers have also said they will strike.

On Sunday, organisers said more than a million people took to the streets holding placards and demanding the government abandon the amendments, though police put the numbers much lower at 240,000.

After the largely peaceful protest, a number of protesters clashed with police outside the LegCo building, leading to injuries and arrests.

The leader of Hong Kong, Carrie Lam, has warned against further mass protests and strikes, saying: “I call on schools, parents, institutions, corporations, unions to consider seriously if they advocate these radical actions.”

What are the proposed changes?

They allow for extradition requests from authorities in mainland China, Taiwan and Macau for suspects accused of criminal wrongdoing such as murder and rape. The requests will then be decided on a case-by-case basis.

The move came after a 19-year-old Hong Kong man allegedly murdered his 20-year-old pregnant girlfriend while they were holidaying in Taiwan together in February last year.

The man fled to Hong Kong and could not be extradited to Taiwan because no extradition treaty exists between the two.

Hong Kong officials have said courts in the territory will have the final say over whether to grant extradition requests, and suspects accused of political and religious crimes will not be extradited.

The government has sought to reassure the public with some concessions, including promising to only hand over fugitives for offences carrying a maximum sentence of at least seven years.

Hong Kong has entered into extradition agreements with 20 countries, including the UK and the US.

What is Hong Kong’s relationship with China?

Hong Kong was a British colony from 1841 until sovereignty was returned to China in 1997.

Central to the handover was the agreement of the Basic Law, a mini-constitution that gives Hong Kong broad autonomy and sets out certain rights.

Under the “one country, two systems” principle, Hong Kong has kept its judicial independence, its own legislature, its economic system and the Hong Kong dollar.

Its residents were also granted protection of certain human rights and freedoms, including freedom of speech and assembly.

Beijing retains control of foreign and defence affairs, and visas or permits are required for travel between Hong Kong and the mainland.

However, the Basic Law expires in 2047 and what happens to Hong Kong’s autonomy after that is unclear.

Chinese foreign ministry spokesman Geng Shuang said on Monday that Beijing would “continue to firmly support” Hong Kong’s government, adding: “We firmly oppose any outside interference in the legislative affairs” of the region.