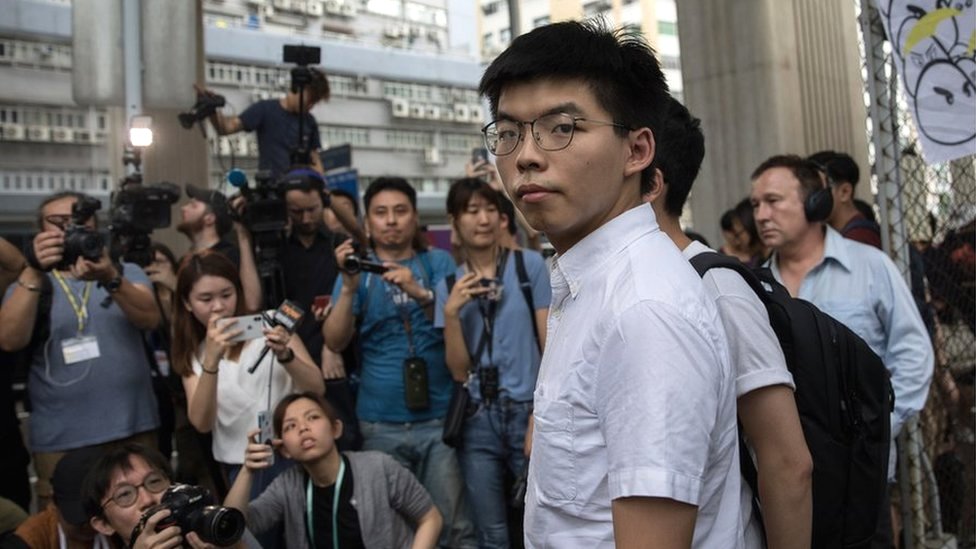 Hong Kong’s most prominent student activist, Joshua Wong, has called for the resignation of leader Carrie Lam, after walking free from prison.

Wong, 22, became the face of the 2014 pro-democracy protests which called for the city to pick its own leaders.

People in Hong Kong are again out on the streets, this time against a controversial bill which would allow extradition to mainland China.

China has said it will continue to support Ms Lam.

Organisers say more than two million people rallied against the extradition bill on Sunday, despite it being suspended. Police put the figure at 338,000.

Critics have said the legislation would expose people in Hong Kong to China’s deeply flawed justice system and lead to further erosion of the city’s judicial independence.

Much of the public anger has been directed at Ms Lam, who is pro-Beijing, and on Sunday she apologised for the controversy over the bill.

Demonstrators are pushing for the bill to be scrapped completely, for those jailed during the protests to be freed and for the resignation of Ms Lam.

Hundreds gathered on Monday near the government’s offices.

Who is Joshua Wong?

Wong left prison after being jailed in May on contempt charges related to his involvement in the pro-democracy protests known as the Umbrella Movement.

Speaking to the BBC, he said he was ready to “join the fight” against the extradition bill, and called for Ms Lam to step aside.

“It’s time for her to end her political career,” he said, saying she had “allowed police to hold a gun to the citizens of Hong Kong”.

“It’s hard for us to accept that Carrie Lam, the leader of Hong Kong, copy the model of the Tiananmen Square massacre to such a modern global financial centre,” he added, referring to China’s bloody crackdown on pro-democracy protests in 1989.

Wong and other student activists led the protests which saw thousands of people camp in the central business district for 79 days, bringing the city to a standstill.

The student activists were later convicted of unlawful assembly and jailed over an incident that helped trigger the mass protests.

Four other pro-democracy activists, including university professors and a Baptist minister, also received sentences for their part in the protests.

Why are people taking to the streets now?

If the protest organisers are right about the turnout on Sunday, it would be the largest protest in Hong Kong’s history.

The demonstration was mainly peaceful, with police officers reportedly holding back to allow the throngs of people to slowly pass through the city. This is in contrast with scenes at the last major demonstration on Wednesday, which saw clashes between protesters and police that injured dozens.

Defending the bill, Hong Kong officials said local courts would have the final say as to whether to grant extradition requests.

Ms Lam’s government also said suspects accused of political, religious and certain types of commercial crimes would not be extradited.

Hong Kong has been part of China since 1997 under the “one country, two systems” principle, which allows it freedoms not seen on mainland China.

Silence and censorship in Chinese media

For the first time on Monday, one English-language newspaper in mainland China has acknowledged that the week-long Hong Kong protests have been taking place.

However, the China Daily newspaper insists that the protests were small-scale, and were specifically against the US “interfering in Hong Kong affairs”.

The Beijing government is extremely sensitive about any protests, whether they are by two people or two million people, as it sees activism over laws that the Communist Party supports as examples of dissent.

Consequently, state media in Chinese language have avoided mentioning them altogether, and have only reported on the suspension of the bill, and the Communist Party’s dissatisfaction with it.

Since last Sunday, government censors have ramped up online censorship of terms related to the protests, and continue to ban any pictures of protesters on the street outright.

Posts on the popular Sina Weibo microblog mentioning “Hong Kong” or “the Hong Kong government” have been consistently censored. And users of the popular WhatsApp-like WeChat have reported that pictures they shared of the protests have been actively taken down.